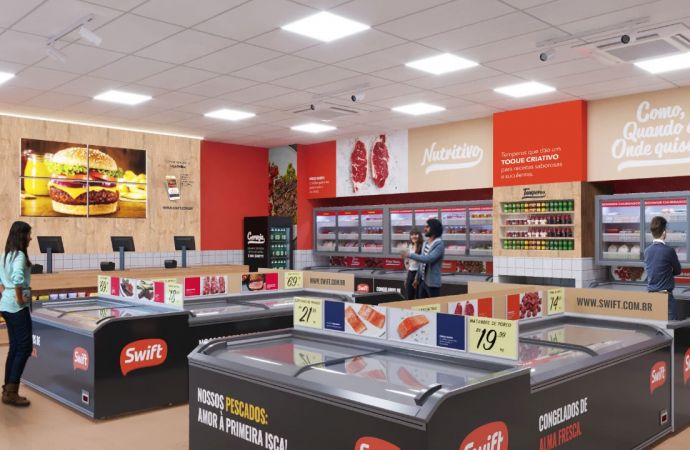 The conversion was carried out in 2021 and together with a new AC system has saved 56% in power consumption in the test store.

Together with a new air-conditioning system from Daikin, the recently installed R290 refrigeration units have saved 56% in energy consumption in the test store.

The conversions were carried out in 2021, and JBS is planning to open an additional 260 stores using R290 plug-in units from AHT. The new installations will save more than 435 metric tons of CO2e emissions per store in 10 years, according to AHT.

The decision to convert was made after testing the solution at a Swift store in Valinhos, north of São Paulo. The Valinhos store was equipped with AHT Kinley XL and Paris cabinets, replacing an old R404A system.

In addition to the low 100-year GWP of just 0.02, the R290 plug-in units offer ease of installation. “Thanks to AHT’s full plug-in technology, no additional pipes or drainage had to be installed,” the company said on its website.

JBS also looked at TEWI (Total Equivalent Warming Impact) when choosing its new systems. TEWI expresses the total impact of a refrigeration system by combining its direct and indirect effects on global warming. TEWI includes the greenhouse effect generated by the refrigerant gas, but also the CO2 emitted to generate the amount of electricity consumed by the system over its lifetime. The TEWI for the Swift project has decreased by 65%.

Collaborating with AHT is not new to JBS. AHT has been supplying refrigeration units to JBS supermarkets in Brazil, Mexico and the U.S. since 2015.

In November 2021, AHT launched the Kalea Freeze Air — a new flexible plug-in R290 freezer with so-called in-box technology. The in-box technology locates the entire refrigeration system in a pull-out compartment near the floor at the front of the cabinet for easy access and maintenance with no downtime.

“
Thanks to AHT’s full plug-in technology, no additional pipes or drainage had to be installed."
– AHT


Want to find out more, or have something to say about this story? Join the ATMO Connect network to meet and engage with like-minded stakeholders in the clean cooling and natural refrigerant arena.