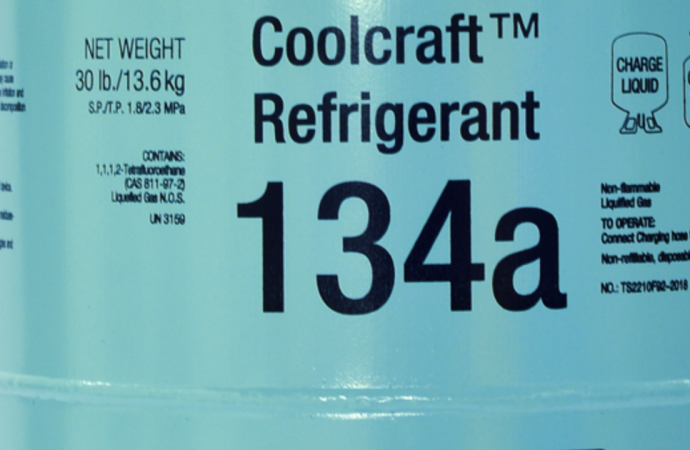 Germany, the Netherlands, Norway, Sweden and Denmark are seeking feedback on their proposal by September 19.

In a move with major implications for the European HVAC&R industry, five EU countries announced on July 15 their intention to submit a joint proposal to restrict per- and polyfluorinated alkyl substances (PFAS), including some HFC and HFO refrigerants, to the European Chemicals Agency (ECHA) under the REACH regulation by July 2022.

The five countries – Germany, the Netherlands, Norway, Sweden and Denmark – are seeking stakeholder feedback on their proposal.

Following submission next year, the restriction proposal would then be subject to “adoption of the final opinions” by ECHA’s Committee for Risk Assessment (RAC) and Committee for Socio-economic Analysis (SEAC), before it would be adopted by the European Commission (EC).

PFAS, which represent a group of over 4,700 “forever chemicals,” are used to produce many consumer products, but exposure to PFAS can be harmful to human health. PFAS include perfluorooctane sulfonic acid (PFOS) and perfluorooctanoic acid (PFOA), which have already been limited and banned, respectively, in the EU.

As defined by the five countries, PFAS cover a number of f-gases, including certain HFCs and HFOs that are used in HVAC&R applications. In addition, trifluoroacetic acid (TFA), which is a PFAS, is an atmospheric degradation product of HFO-1234yf and HFC-134a.

The REACH regulation governs the registration, evaluation, authorization and restriction of chemical substances in the EU. HFCs are separately regulated by the EU F-Gas Regulation, though HFOs are not. In the U.S. the Environmental Protection Agency also recently increased its oversight of PFAS, and is in the process of separately regulating HFCs. On July 15, the U.S. state of Maine became the first government in the world to ban the sale of products containing PFAS as of January 1, 2030, with exceptions for health and safety needs for which alternatives are not available.

Along with their announcement of intent, the five EU countries released a survey in which “the affected industrial associations and companies, but also companies that produce alternatives to PFAS,” can add or correct information published by the countries on PFAS, said the German Environment Agency (UBA) in a statement.

“The aim of this survey is to ensure that the information available reflects the current market situation and to fill data gaps,” said the UBA. “In this way, possible exceptions for some uses of the PFAS that will also be important for society in the future can be identified and all relevant information can be taken into account when submitting the restriction proposal in the coming year.” The countries conducted a similar survey last year.

Stakeholders are encouraged to respond to the survey by September 19, 2021. It can be accessed here.

The EC defines restrictions under REACH as “regulatory measures to protect human health and the environment from unacceptable risks posed by chemicals.” In addition,  “restrictions may limit or ban the manufacture, placing on the market or use of a substance,” the EC says. “A restriction can apply to any substance on its own, in a mixture or in an article, including those that do not require registration.”

Among the HFCs that the countries identified as being PFAS are: R32, R134a, R125, R143a and R152a. Some of the HFOs include R1234yf, R1234ze(E) and R1233zd(E). These HFCs and HFOs fall under the scope of PFAS as defined by the countries, which is that a substance contain at least one CF2 (perfluorinated methylene group) or one CF3 (perfluorinated methyl group) in its molecular structure.

However, the f-gas industry in Europe has pushed back against the classification of HFCs and HFOs as PFAS. “HFCs, HFOs and HCFOs are a distinct subset and due to their properties are not commonly regarded as PFAS,” says the European Fluorocarbons Technical Committee (EFCTC) on its website.

As described by the five countries, PFAS “are, or ultimately transform into, persistent substances, leading to irreversible environmental exposure and accumulation.”

Due to PFAS’ water solubility and mobility, “contamination of surface, ground-, and drinking water and soil has occurred in the EU as well as globally and will continue,” said the countries. “It has been proven very difficult and extremely costly to remove PFAS when released to the environment. In addition, some PFAS have been documented as toxic and/or bioaccumulative substances, both with respect to human health as well as the environment.”

“Without taking action, their concentrations will continue to increase, and their toxic and polluting effects will be difficult to reverse,” they added.

In a previous report, issued in May, the UBA sounded the alarm about the atmospheric conversion of HFO-1234yf into TFA, noting that higher levels of TFA have been found in rainwater. The report concluded that HFOs should be replaced by natural refrigerants.

“
Without taking action, [PFAS’] concentrations will continue to increase, and their toxic and polluting effects will be difficult to reverse.”
– Governments of Germany, the Netherlands, Norway, Sweden and Denmark