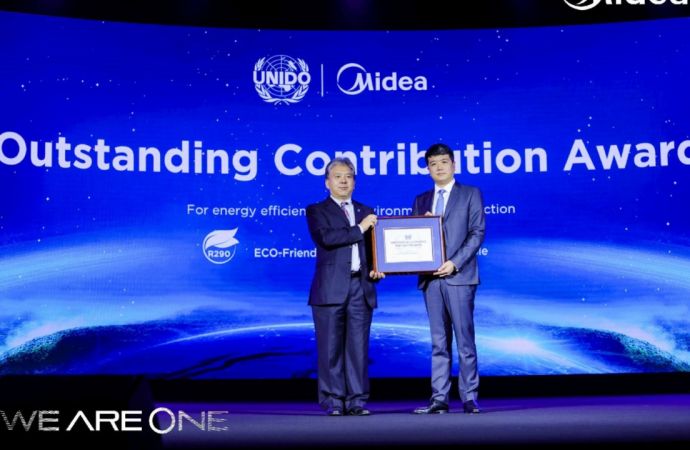 Two Midea AC models have qualified for the strict German Blue Angel ecolabel, the only room air conditioners to achieve this certification.

UPDATE: After querying UNIDO, they have informed us that the shipment is still in transit to Germany (September 7). We will update the article when we know more.

The first shipment of All Easy R290 units arrived at the company’s European headquarters in Germany recently, according to the United Nation’s Industrial Development Organization (UNIDO).

The stringent Blue Angel standard for split ACs was established in 2016. To qualify for a Blue Angel ecolabel, a system must “use halogen-free [non-HFC] refrigerants, and also, no ammonia,” according to Daniel de Graaf, Scientific Assistant at UBA.

The seasonal energy efficiency ratio (SEER) “needs to be seven or higher,” de Graaf said. In addition, the AC units need to have a Seasonal Coefficient of Performance (SCOP) of at least 4.6. An additional requirement is that AC units must be easy to clean and service to ensure a high life-cycle energy efficiency.

“Portable R290 air conditioners made by Midea have been on sale in Europe for some time, but the arrival of Midea's All Easy Series R290 units is a game-changer,” UNIDO said. “The availability of Midea's R290 split air conditioners is set to shake up the European market, driving a transition that will help reduce both energy consumption and greenhouse gas emissions on the continent.”

The Blue Angel certification, owned by the German Federal Ministry for the Environment and managed by the German Environmental Agency (UBA), is the oldest ecolabel in the world, established in 1978. It covers 120 product groups. The label has been awarded to about 1,500 companies, and 12,000 products.

In 2020, Midea was presented with an award by UNIDO for its “outstanding” contribution to environmental protection, and the organization said its “would like to express its highest appreciation to Midea for its ongoing efforts to develop, manufacture and introduce to the market, residential air conditioners that meet the highest environmental standards.”

“
Portable R290 air conditioners made by Midea have been on sale in Europe for some time, but the arrival of Midea's All Easy Series R290 units is a game-changer,” - UNIDO