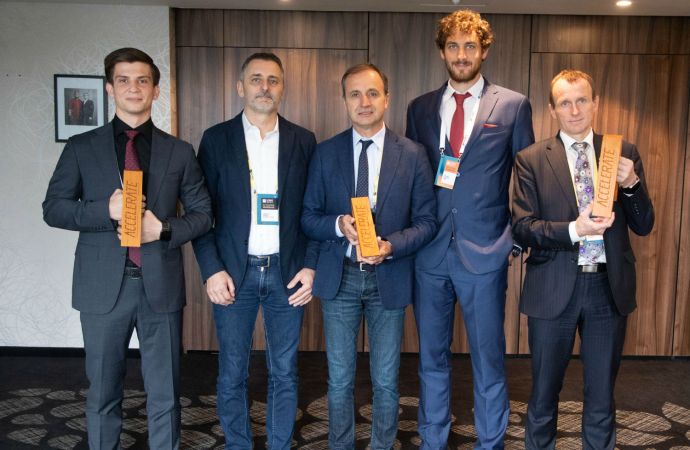 shecco announced the winners of the 2019 Accelerate Magazine/Europe awards at ATMOsphere Europe in Warsaw, Poland, on Thursday (October 17).

The Accelerate Magazine Awards/Europe program, now in its third year, recognizes people and organizations that excel in advancing natural-refrigerant technologies. The winners were selected by shecco, with the exception of the Innovation of the Year award, which was based on public vote leading up to the ATMOsphere Europe conference.

This year’s winners were selected for the following accomplishments.

Biedronka, part of Jeronimo Martins Group, has about 3,000 small-format stores in Poland, approximately one-third of which use small transcritical CO2 systems from Advansor and Carrier. (About 20% of display cases use R290.) In 2017, it started its ambitious plan of retrofits and new openings; so far the rollout plan has converted 600 existing stores to transcritical CO2 while adding 350 new stores. In 2020, 300 more stores will be retrofit with CO2, and the technology will be installed in 150 new stores. Biedronka is also converting its 16 distribution centers to CO2 and by 2025 expects to use zero HFCs.

Bofrost has installed a transcritical CO2 refrigeration, supplied by Italian OEM Crea, at its existing cold-storage facility in Pordenone, Italy, replacing a system that employed HFCs. The system manages the cooling needs of the entire warehouse as well as a closed water circuit to air condition the offices.

Bofrost’s facility is divided into three cold-storage rooms: one of which includes an automatic storage system that can’t be stopped. Consequently, the addition of the CO2 system had to be accomplished “without interfering with the normal activity," said Crea.

In addition, because of their position, “it was impossible to remove the old evaporators,” Crea noted, and so the CO2 evaporators “were mounted on dedicated supporting structures, in different positions from the previous ones, postponing the dismantling activity.”

The CO2 system consists of two medium temperature-low-temperature booster systems, designed to supply more than 800kW (256TR). The refrigeration units are positioned outside the warehouse on a steel structure inside two separate containers. “After the first months of operation, there was a significant drop in energy consumption,” said Crea.

Zgliczynski was the leader of the five-year effort that, on May 9 of this year, resulted in the approval of an increase in the IEC’s charge limit for A3 (flammable) refrigerants in self-contained commercial refrigeration display cases (under IEC’s 60335-2-89 standard). That limit rose to 500g from 150g, while the charge limit for A2 and A2L (low flammable) refrigerants increased to 1.2kg (2.6lbs) from 150g.

The effort to amend the 60335-2-89 standard with a higher charge limit for flammable refrigerants has been in the works since 2014, when the IEC’s SC 61C created a Working Group (WG4) for that purpose.

As the global organization establishing baseline standards for electrical equipment, the Geneva, Switzerland-based IEC has a huge influence on what systems, including those using natural refrigerants, will ultimately be adopted on a regional level. Thus, its approval of a 500g charge limit for hydrocarbons like propane (R290) and isobutane (R600a) is one of the most important advances for natural refrigerants in recent years. It sets the stage for what could be a significant rise in the number of hydrocarbon-based self-contained display cabinets.

The IEC is now working on updating the charge limit for hydrocarbons in air conditioning and heat pumps under IEC 60335-2-40, a change that would have a major impact on the adoption of R290 room air conditioning units.

Mirai’s COLD 15 air-cycle refrigeration machine is capable of cooling down to -130°C (-202°F), said Mirai, based in Brno-Tuřany, Czech Republic. Mirai describes the machine as “extremely reliable and durable.”

The COLD 15 machine operates in an open-cycle (direct cooling by air) thanks to the reverse-joule air cycle. It uses ambient air, which is free, abundant, environmentally friendly, non-toxic and non–flammable, and there is no need for refilling.

The machine is “particularly efficient” at producing temperatures from -40°C (-40°F) to -110°C (166°F), said the company, adding that to reach these temperatures, traditional systems have to use liquid nitrogen or multiple cascades with HFC refrigerants.

The system features a turbo-expander and compressor located on the same shaft, which allows energy consumption reductions of up to 30%, the company said.

Mirai pairs its COLD 15 refrigeration machine with a humidity-extraction device, preventing accumulation of ice and removing the need for defrosting.