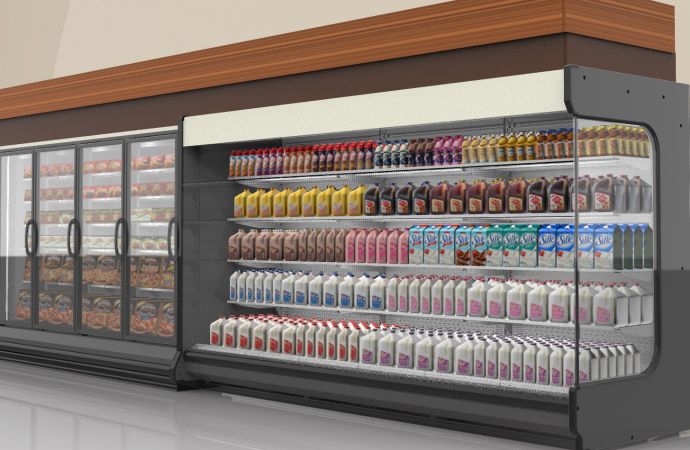 Hussmann, a St. Louis, Mo.- based manufacturer of refrigeration equipment for the food retail industry, has unveiled a new complete-store refrigeration system based on self-contained display cases that employ environmentally safe propane (R290).

While many stores are using self-contained cases from these companies as spot merchandisers to complement remote systems, not many are employing them on a full-store basis, which Hussmann is supporting with the microDS line.

The merchandisers in the microDS line include full-sized grocery cases – such as five-door reach-ins and open multidecks up to 12-ft long.

Waste heat from the cases is withdrawn by a closed water loop with water-inlet temperatures up to 115ºF, which is cooled by a roof-mounted dry fluid cooler. Walk-in coolers and freezers utilize propane units that also connect to the water-loop system.

Tim Figge, CEO of Hussmann (a subsidiary of Panasonic), said microDS represents “an excellent option for customers to use natural refrigerants with lower installation costs and increased merchandising visibility.”

Hussmann has installed the new propane units in several grocery stores operated by multiple retailers (who could not be named without their permission), said Richard Gilles, senior product leader for Hussmann’s Distributed Systems Group, adding, “A lot more are planned for 2019.”

So far, the units are being used in mid-sized stores (about 35,000 sq ft), though the system's scalability makes it suitable for larger or smaller stores as well, he said.

The self-contained cases utilize circuits charged with up to 150 g, or just 5.3 oz, of propane -- slightly more than a half-cup. One circuit serves up to three doors of a reach-in lineup and four feet of an open multi-deck configuration, said Gilles.

The small amount of propane used in the microDS full-store system is 90% to 95% less refrigerant than typically required in remote refrigeration systems using HFCs.

Propane also has a negligible GWP (three), compared to that of commonly used HFC refrigerants with GWPs exceeding 1,300. This makes the system virtually “future-proof” – not subject to evolving state and federal environmental regulations, said Gilles.

Moreover, the easy-to-install self-contained cases are pre-charged and hermetically sealed to prevent propane from leaking into the atmosphere, Gilles said.

The International Electrotechnical Commission (IEC) has approved advancing to a final vote on whether to boost the charge limit on A3 (flammable) refrigerants from 150g to 500g.

"We support the current charge limit of 150 g, but will of course be prepared to support our customers if the charge increase occurs," Gilles said.

Gilles anticipates growing interest in propane cases in North America among food retailers, who recognize the safety and performance of the units.

He does not see the movement toward sustainable refrigeration deterred by the recent rollback of federal regulations on HFCs. “Retailers don’t build for two years; they build for decades,” he said. "And many realize the long-term benefits of propane as a sustainable solution."

Moreover, sustainable technology has become “engrained in the culture, especially with young shoppers, who want to shop with companies that are responsible and sustainable,” he said.

Installing the propane system and water loop requires only “a garden hose connection and plugging in the cases,” he said. “It’s as simple as it gets.”

The new line is not Hussmann’s first self-contained propane offering. In 2013, a new H.E. Butt Grocery store in Austin, Texas, installed 70 of Hussmann’s self-contained low- and medium-temperature cases using propane refrigerant and cooled by an HFC glycol-loop system; these cases covered the majority of the store’s refrigeration.

Since then Hussmann has been able to design “more and better features” for propane cases, including “intrinsically safe” components that dispense with the need for propane sensors, said Gilles.

Hussmann, in partnership with Systemes LMP, also markets another natural refrigeration system – transcritical CO2. The new microDS propane offering gives the company “another arrow in our quiver,” allowing its customers a wider selection of systems to fit their particular needs, Gilles said.