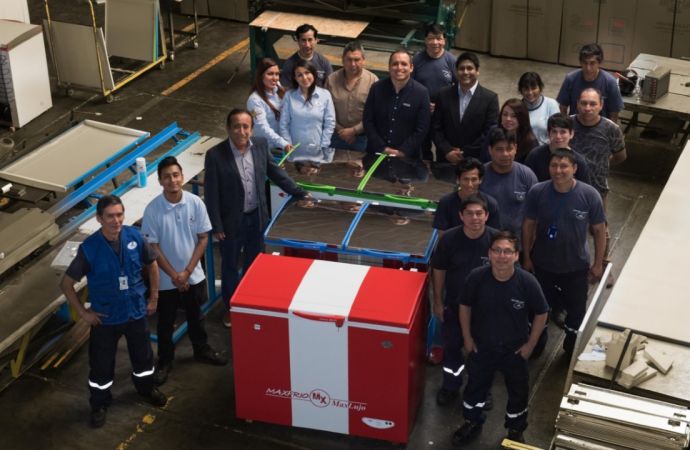 Frio Peru achieved a 40% increase in cooling capacity for its customers by using Embraco R290 compressors.

The Frio Peru team with some of its freezers using Embraco R290 compressors.

Since converting its entire production of commercial freezers to propane (R290) two years ago, Peruvian manufacturer Frio Peru SAC says it has achieved a 40% increase in cooling capacity and a 28% reduction in energy consumption for its retail customers.

Frio Peru is the first in the country to use only R290 in its commercial freezer product lines, according to a statement from Embraco, which delivers the compressors for the new freezers.

Frio Peru’s customers are mainly markets and mini-markets, which use the freezers for frozen meat, production of ice packs and beverage cooling. The “clients [are] extremely satisfied with the new products,” said Juan Vélez Gauna, General Manager of Frio Peru.

“We have received positive comments from all regions,” Gauna added. “We managed to guarantee more efficiency in the cooling of food and protect the environment.”

The move to R290 has also helped Frio Peru’s bottom line. From 2018 to 2019 Frio Peru’s sales increased by 127%. Final sales for 2020 have not been calculated yet, but the company has definitely sold more than in 2018, Embraco said in its statement.

The decision to move to R290 was made in 2017. “This decision was motivated by the importance of sustainability combined with the efficiency gains the change would bring,” Gauna explained. The first prototypes using compressors from Embraco’s EM2 family were developed the same year.

In 2018, Frio Peru focused on training its staff all over Peru in working with the new technology, while increasing the number of freezers produced with R290. Since 2019, all of its products have been entirely R290.

Frio Peru started operations in 2006. It produces freezers that are both stainless steel and with colors and colored bands. The company is also the only one in the country to use an evaporator with copper piping in “D”, which generates better heat transfer and faster cooling, according to Embraco.

Embraco also has a long and noteworthy history. It celebrated its 50th year as a brand earlier this year.

Embraco’s parent company, Nidec Global Appliance, recently completed a business reorganization creating three new business units: commercial appliances, HVAC and home appliances. The structural changes were implemented throughout 2020 with “the goal to operate with a more dedicated focus on the specific market segments in which the division is present, increasing speed and customer focus,” the company said.

In February 2021, Nidec partnered with Accelerate Japan, to position itself on the Japanese market in anticipation of growing demand for propane-based systems in Japan's commercial food retail sector. Accelerate Japan is published by shecco, publisher of hydrocarbons21.com.