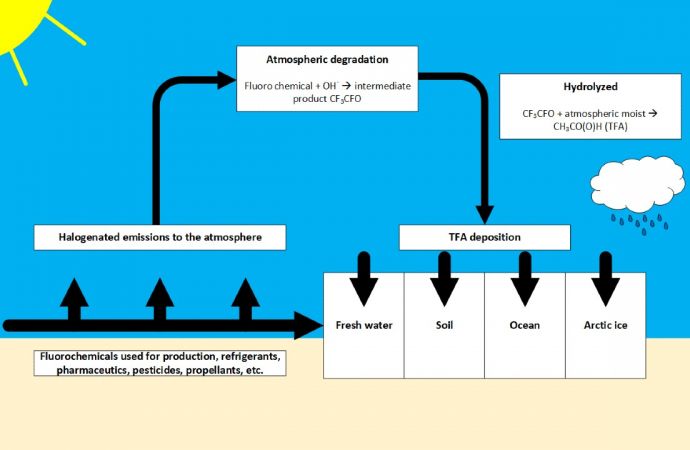 The report, by Refolution Industriekälte GmbH, cited a year-long study of rats indicating liver damage due to TFA.

Description of chemical transformation of HFO (1234yf) to TFA, from new report by Refolution Industriekälte GmbH

Long-term exposure to HFO byproduct trifluoroacetic acid (TFA) can potentially damage the liver and the thyroid function in humans, according to a report released today by Refolution Industriekälte GmbH, a Karlsruhe, Germany-based  consulting and engineering firm focused on sustainable refrigeration.

The report – "Report and statement of the downsides of HFO refrigerant usage – Impact of fluorochemical refrigerants and their degradation products on the environment and health" –  is available here.

While the report acknowledged that there is no threat of acute TFA toxicity for humans at any of the "current or expected concentrations," it said that “long-term exposure with low concentrations [of TFA] showed elevated ALT [alanine transaminase]-concentrations and indicate that TFA in drinking water can potentially damage the liver and have other impacts, for example on the hormone system,“ in particular thyroid function.

An elevated blood level of ALT, an enzyme, is an indication of liver damage. In regard to the thyroid, the report noted that, while there is a lack of information in the literature regarding the general effect of fluorochemical refrigerants on the thyroid, "it is known that halogen molecules influence the thyroid function. Therefore, HFO and TFA might also have the possibility to cause hypothyroidism and other consequences such as the brain development of children due to iodine deficiency during pregnancy.“

TFA is readily formed in the atmosphere from the degradation of HFO-1234yf and, to a lesser degree, other fluorinated refrigerants. It comes down to the earth’s surface as a form of “acid rain” and accumulates in the aquatic environment, especially in terminal water bodies with high evaporation rates.

HFO-1234yf is widely used as a replacement for HFC-134a in mobile air conditioning, and as part of HFO blends (such as R449A and R513A) used in commercial refrigeration and ice rink systems.

TFA's impact on the environment is "well established" with regard to freshwater green alga (selenastrum capricornutum, which is the most sensitive algae to TFA in the aquatic environment, the report noted.  The report acknowledged that in other environmental impacts, the current and expected concentrations TFA lower than the concentrations known to have a negative effect.

However, it noted, "exact concentrations are difficult to predict and concentrations might be higher than estimated by global atmosphere models in the future."

The report's overarching message was a warning to the HVAC&R industry: Before bringing tonnes of chemicals into the environment, it needs to be proven that they are harmless to human and the environment, especially regarding chemicals with high persistence such as TFA.”

If this warning goes unheeded, the report said, “It is no question that sooner or later negative effects or an environmental disaster will happen; it is only a question of when it will happen.”

Indeed, history has already demonstrated  that emitting chemicals or substances in large quantities into the environment without knowing their exact impacts "can result in global threats that prevail over generations and require regulations to avoid further damage,“ the report said.

Taking this risk is unnecessary, the report noted, given  that natural refrigerant alternatives are widely available for a myriad of applications. "We demand to immediately stop the selling of synthetic refrigerants and switch to naturals only,“ said the report.

The report described "a long-time toxicity assessment of TFA," citing Umwelt Bundesamt, 2020, which was performed after "concerning reports of high TFA concentrations in waters in NRW, Germany.“

In this study, rats were exposed for one year to TFA concentrations in of 0 ppm, 30 ppm, 120 ppm and 600 ppm infreshwater. "The study showed an increase of the ALT-concentration (alanine aminotransferase) depending on the dosage of TFA," the report said.

In another study where TFA was given to pregnant rats (in the 10th-20th day of pregnancy) a temporary dysfunction (at about 50 days) of the liver and kidney was observed, the report said, citing GESTIS-Stoffdatenbank.

The report also noted the connection between the use of halogenated inhalational anaesthetics, notably halothane, and the production of TFA and subsequently trifluoroacetylate components that are associated with liver injury. Here, too, there is an "acute increase" of ALT, as well as aspartate aminotransferase (AST), which "remain elevated for one to two weeks following exposure and resolve without treatment," said the report, citing Wright et al, 1975 ("Controlled Prospective Study of the Effect on Liver Function of Multiple Exposures to Halothane," The Lancet, 305(7911), 817–820).

Concerns about TFA have influenced Germany policy on allowable TFA concentrations in freshwater. Based on the NOEC (no observed effect concentration) threshold of 30 ppm for humans (about 1.8 mg/kg body weight), the maximum TFA concentration in freshwater in Germany has been set to 60 µg/l; however, the German Environment Agency (UBA) recommends not exceeding 10µg/l.