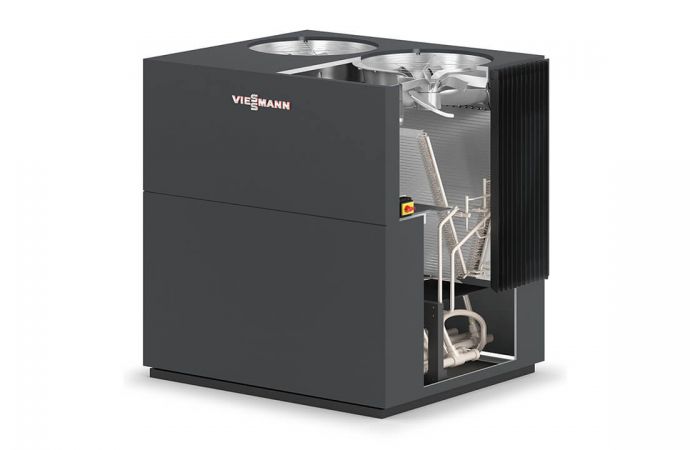 The new Vitocal 300-A Pro is expected to have four output sizes, offering a combined coefficient of performance COP of up to 10.

The condensers and evaporators of the Vitocal 300-A Pro work in constant counterflow in both summer and winter, resulting in a combined COP of 10 when heating and cooling.

German manufacturer Viessmann Group will introduce a new energy efficient version of its Vitocal heat pumps – the 300-A Pro, which will be able to deliver both heating and cooling simultaneously, with a combined coefficient of performance (COP) of up to 10.

The launch was scheduled to happen in August 2020. However, then came COVID-19, and "the market launch of the new units will be significantly delayed due to the Corona pandemic,” said Wolfgang Rogatty, Head of Trade Media at Viessmann.

A tested COP of up to 10 means that the 300-A pro “offers the maximum efficiency in its output class by a wide margin, as well as particularly low operating costs,” according to a press release from Viessmann.

Such capacities make the 300-A Pro suitable for large residential buildings, neighborhoods, commerce and industry, according to Viessmann.

“
The 300-A pro offers the maximum efficiency in its output class by a wide margin, as well as particularly low operating costs” - Viessmann

The circuitry in the 300-A Pro’s heat exchanger is patented and enables the unit to carry out both cooling and heating operations in parallel. The “unique” construction of the cooling circuit makes a four-way valve unnecessary, increasing reliability compared to traditional circuits, Viessmann said. The 300-A Pro is also low-charge, as each of the heat pump circuits has an R290 charge of less than 12kg (26.5lbs).

The high combined COP is achieved by having the condensers and evaporators working in constant counter flow, both in summer and winter. The COP has been tested under the EN14511 A7/W35 standard. The air heat exchangers also ensure that fewer defrosting operations are needed, contributing to the high efficiency.

In addition to a high COP and reliability, the new 300-A Pro also offers the benefit of quiet operation due to the modulated operation of the compressor. It has a maximum threshold of 69dB(A), while a night mode setting can reduce the noise level by an additional 6dB(A).

The units are smart-grid ready and have internet connectivity, allowing for remote monitoring. Viessmann’s own Vitotronic SPS 2.0 can control up to four of the heating or cooling circuits.

The original Vitocal 300-A heat pump won a Red Dot design award in 2014 and received a special mention at the 2015 German Design Awards.