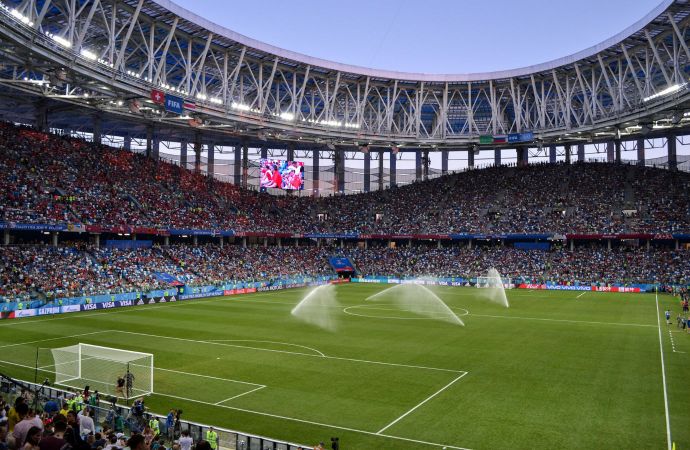 The FIFA World Cup 2018 is using HFCs to air condition all the stadiums.

The final of the FIFA 2018 World Cup, taking place this Sunday in the Luzhniki Stadium in Moscow, Russia, will be air conditioned with potent climate pollutants hydrofluorocarbons (HFCs).

The South Pole Group, which wrote a report on greenhouse gas emissions for world football governing body FIFA, confirmed by email to this website that the stadiums of the 2018 World Cup are using HFCs.

It is not clear from the report if the installations in the stadiums are new or old. “Unfortunately, we do not know which stadium equipment was installed just for the games and which was installed a longer time in advance, since this was not included in the scope of the study,” Franziska Sinner, head of corporate sustainability at the South Pole Group, told this website by email.

FIFA has been under increasing pressure during this Cup to meet its climate commitments. The global football organisation, “was the first international sports organization to sign up to the UN Climate Change's Climate Neutral Now [initiative], pledging to offset the emissions of travel to the 2018 World Cup and to go carbon neutral by 2050”, according to Ecowatch, and claims “all the stadiums at Russia 2018 meet international sustainability standards”.

Nonetheless, the tournament’s stadiums use high-GWP refrigerants for air conditioning. Russian climate activists have alleged that some of the stadiums were built in vulnerable ecosystems, according to EcoWatch.

Moreover, a controversial UN carbon-offsetting scheme being used at the World Cup by FIFA is unlikely to deliver emission reductions, according to Öko-Institut, a consultancy. The scheme was criticised in a 2016 study for the European Commission, which “suggested” that only 7% of the scheme’s promised emissions reductions were likely to deliver “real, measurable and additional” reductions.

The criticism of this scheme calls into question the 243,000 tonnes of CO2e emissions that FIFA has pledged to offset during this World Cup.

Could natural refrigerants have been used instead?

If the Cup had used natural refrigerants it would have avoided 0.47 thousand tonnes of CO2e emissions during the games (the South Pole Group only took into account estimated refrigerant leakage during the Cup).

Natural refrigerants could have been harnessed instead by using chillers to air condition the stadiums according to Alexander Cohr Pachai, who works at Johnson Controls, a leading OEM, and chairs an International Institute of Refrigeration (IIR) safety group.

Ammonia chillers for hotels and large buildings, as well as propane chillers, have been used to cool large buildings (and in the case of propane small buildings) in many installations, Pachai notes, and could have been used for the World Cup stadiums too. Notable examples of large installations in public areas with ammonia air-conditioning, Pachai cites, are some of Europe's main airports like Zurich in Switzerland, Heathrow Terminal 5 in the U.K., Copenhagen in Denmark and Oslo Gardemoen in Norway.

Pachai, who is also a member of the Refrigerant Technical Options Committee (RTOC) under the Technology and Economic Assessment Panel (TEAP) –  an advisory body to the Montreal Protocol Parties –, cited the example of two Russian ice rinks which have been cooled by ammonia since 2001 and 2004 respectively.

In discussions with Russian colleagues, he noted that, “NH3 is not popular in Russia for leisure applications as its considered by regulations as toxic and explosive [...] Normally in Russia ammonia [is used] for industrial applications only”.

The Russian government has been looking at moving towards natural refrigerants since 2013, according to a presentation by a representative of the Ministry of Natural Resources and Environment of the Russian Federation.

Leading companies like Mars, Mondelez and Nestlé are already using ammonia for their refrigeration needs, he adds. Ammonia air conditioning “is already being done” in many places throughout the world, but might represent a challenge in countries like Russia, which may not have the capacity to develop the technology, and “probably does not have the trained people to do the job”.

“The simple answer is ‘yes, ammonia would have been a better choice’,” Pega Hrnjak, president of Creative Thermal Solutions, Inc. (CTS) and professor at the University of Illinois at Urbana-Champaign, who is a notable researcher on ammonia technology, told this website.

But Hrnjak explained, as he did at ATMOsphere America last month in Long Beach, California, that ammonia is still yet to enter the chiller market in a big way. “Nevertheless, for such huge capacities (we are talking many MWs) and very high evaporation temperatures, a superior solution nowadays is centrifugal chillers, typically on magnetic bearing without oil,” he explains.

Many of these machines continue to use HFCs like R134a and some are moving to HFOs, he added.

So what does FIFA say?

Regarding refrigeration, it is unclear whether the stadiums are using HFCs or natural refrigerants. “Refrigerants and resulting emissions from fridges would be comparably low and hence got excluded in the calculations due to materiality,” the South Pole Group’s Sinner told this website

FIFA was contacted to comment but is yet to respond to questions as to whether the World Cup stadiums have newly installed air-conditioning or refrigeration equipment and whether the beer fridges use natural refrigerants or HFCs.

This website has also contacted the World Cup official partners – McDonalds, the Coca-Cola Company and Budweiser (a brand of ABinBev) – which may have supplied fridges for the Cup (as is often the case for sporting events) to find out whether they are using natural refrigerants or HFCs. They are yet to respond but ABinBev has let this website know they are looking at whether they brought HFC-free fridges to the Stadiums and to the stands outside the World Cup Stadiums.